So having had all my dreams of The Good Life dashed for 2017, I began doing my best ‘Damsel’ impression. Soon enough, along came the flatcapped old gents and their respective lovely ladies to give me advice and help me being my journey.

This is one thing i have learned about allotmenteering – everyone has an opinion, some advice, a recommendation. It is worth more than gold as they have done it all before. But do always remember that this is your adventure and no matter how you choose to do it always do what YOU want. People don’t all have the same shopping lists from the veg aisle, so why should they want the same things out of their gardens?

The man across the lane from us is only 3 years older than me, but he has had his plot for 10+years. He has recently taken on the plot next door too, so pretty much has a farm. I see it every morning on my way up and I see it through my gates while I am working. Its immaculate and perfectly weeded and mulched. There are superbly level and straight paths, with fluffy beds and neat rows of plants. Greenhouses and polytunnels stretch out in lines and a wonderful (dry!) tea cabin and shed puff smoke out of the log burner chimney. To say I am a bit envious is an understatement.

Now Mr AcrossTheLane came to join the small group stood on my plot debating the best course of action, and said the one thing that I have remembered to this day;

“Don’t do it all at once, you’ll hate the place. Tackle jobs as they come and enjoy the mess” – Mr ATL

At the time, bitter little me stood there and thought “Hmm, yes, easy for you to say!” but looking back I can now see what he meant. It is very easy to loose all focus and go in all guns blazing, but in honesty there are many things I wish I would have taken my time on. As soon as it becomes a chore, it looses its meaning.

So the first thing I did was try and make it a little less daunting. Those knee high weeds and nettles did nothing for my motivation, but we had to start somewhere. 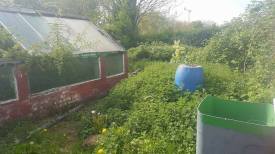 Between the two greenhouses

The large greenhouse, home of the bindweed

I began by getting out my trusty kitchen scissors and snipping off every single clock-head of dandelion. Many of these were already releasing the seeds, and I knew that I needed to limit the damage that these seeds would cause asap.

My yellow bucket full of seed heads and junk!

This. Took. Hours. My back was killing me, but by the end of it the lovely crackle that these seeds made on the bonfire rather than growing on my plot made me feel better.So my next step was to get in touch with the Hubby’s dad, and hope that he would let us borrow his petrol lawn mower. This step wasn’t really necessary, but I couldn’t cope with the nettle stings anymore.

And boy did Paps deliver!! This machine was amazing! It was about as old as my MrT, but it was definitely a golden oldie and powered through everything from the nettles and bindweed right up to the bramble stems. And it collected the trimmings as it went along too! It didn’t get very far before it needed emptying, but it is used to doing a nice grassy lawn not a giant knee-high weedy meadow. It cost us a lot of petrol and a new pull cord starter, but this little powerhouse gave me back a bit of hope for the plot.

How much better does this look?!

Off the back of my success, I then made a decision that will be a controversial one… I decided to spray the brambles and perennial weeds.

I KNOW! How could I? But in all honesty I work 8-5 weekdays and MrT does 12+ hours a day cheffing, so we needed this to be as low maintenance as it could be. So on the back of a recommendation by Mr AcrossTheLane, we invested in enough weedkiller to treat half of the plot only.  The second half would be split between chickens (if I could work out how to keep Foxy away) and plastic covering to kill the weeds naturally. This weedkiller would take anywhere from 1 week two 3 weeks to work, and would need multiple applications on hardy things like perennial nettles, ivy and brambles.

I began spraying immediately after mowing, in the hope that the weedkiller would then be drawn straight into the centre of the stems. I also painted the weedkiller directly on to the leaves of the bindweed and ivy which strangled my hedges.

All I could do then was wait!

In the meantime, I went on a bit of a rampage around the greenhouses and cleared all I could. 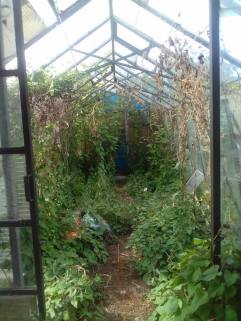 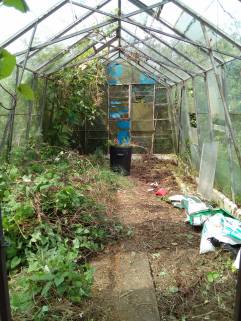 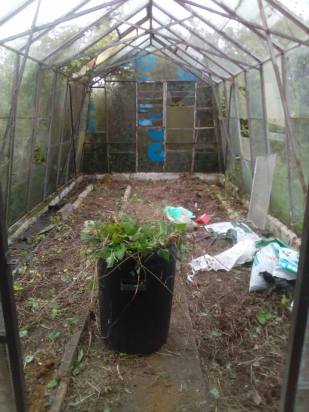 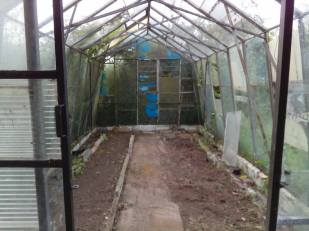 How different does this look now! Yes the windows were mostly broken, and the soil was dry, old and cakey but nothing I couldn’t fix! There was also a huge hole in the roof of the entrance, where a log burner used to be, and several birds making their home in the beams. But I loved it. It wasn’t perfect but it was ours.

He is a diamond

The next day, I came home from work to find MrT missing! And where was my man? Only out here chopping down the bits I couldn’t reach! He managed to get the whole 40m hedge trimmed back and under control in a day, and I couldn’t have been happier!

That evening we sat back with a bonfire and admired how far we had come. I finally felt like I was getting somewhere.

Next up was deciding what we could do within the small amount of the season we had left..!