The whole point of getting an allotment was to make something to eat. But at this stage of the game, that’s a long way off.

Now yet again, MrT was working. So I was going it alone. I had a very vague plan and a very big dream, with not much in the way of strength or money.

I figured that I would make a temporary run and coop, and gradually update it as and when I had more of a plan and had done a little bit more research into the best ideas. Since I couldn’t find much info on how best to keep chickens at an allotment, I just adapted what I could from all of those posh folks who have big enough houses to keep them at home (not jealous at all!!).

So my plan was to put the chickens by the front gates, in the hope that then my pigeon keeper neighbour would be able to look in on them while I was working.

So this is where they are going to go. That pallet block up a space in the hedging which goes through to the abandoned waste ground next door. This plot is impossible for the council to clear so they have left it as a ‘Wildlife Area’ – also known as a dumping ground. It does mean though that the tree overhanging that corner cant be accessed from anywhere but on my plot, and what is that tree? An Elderflower! Champers here we come!

Not yet though, before drinking comes building. So onto the internet I hopped in the hope of finding a potential ‘chicken house’. 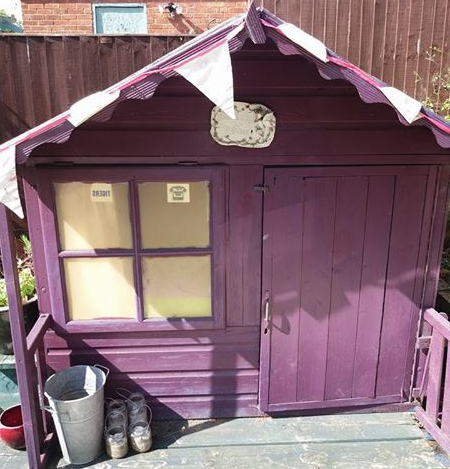 Look what I found!

And thus, the temporary chicken hut was found. I took out the window panels and put in some chicken wire for ventilation and put up an old wooden ladder cut in half as a roost. I built a nesting box out of some scrap ply and hoped they would like it!

So next up was building my little chickys a run. This would be the ‘interesting’ part. I powered up the cordless drill and gathered up my supplies early Saturday morning in the hope of getting everything done in a day.

I began by journeying to the local DIY shop to buy myself some treated wooden posts, and soon realised that I needed to edit the size of the run so that i could fit it in my car. Not a great start.

Having managed to haul it all home, I spread out my ‘posts’ and began to build a cube. As the daughter of an engineer dad and a mother who asked for a compound mitre saw for her birthday, I knew reasonably well how to work a drill.

Having built my giant cube, I then added two beams the same height to one side to act as a door frame. I didn’t cut this down to sit flush with the walls, as I wanted to make sure that I could attach a hasp and lock to it so that I can keep it closed when I’m inside the run with them. It also means that it can only open outwards, not inwards. I thought this would be easier to stop the girls from escaping when I am going in and out. If you wanted to make it open both ways, just shorten the beams so that they sit flush with the cube sides, and shorten the gate to fit later on in the steps. If you’d like me to send you over the rough drawn napkin plans I made for both scenarios, just leave me a comment with your email.

Next up was to cover my  cube in aviary wire. We found a roll of this at the allotment during the Mass Mow and I got some more by scouring online freebie sites, but I still didn’t have enough to do the whole thing. I used the thicker aviary wire around the bottom of the run as foxes can chew through normal chicken wire! This was stapled on with a heavy duty stapler I already had at home and some galvanised staples, in the hope that they wouldn’t rust away. I didn’t cover the gate opening for obvious reasons! I made sure to leave a ‘L’ shaped overhang at the bottom of the run to stop critters from digging under the fence too.

Next step was to finish off enclosing the sides with chicken wire. I also used so scaffolding net to cover the top of the run, as I didn’t want to have to clip my hens’ wings.

Then I had a well earned brew and admired my handiwork.

While the kettle was boiling, I quickly made up a rectangle the same height and width as the door frame. At this point, make sure that you leave half a cm either side so that the door can swing open and closed easily, even when cold and wet and the wood has swollen. I put a brace across the middle to keep it square. Usually this would be diagonal, but I really didn’t have the brain power this late in the game to work out the angles, so this would do for now. It also aids as an extra place to add my handle/bolt.

Time for another brew.

Next up, cover the gate in the same mix of aviary wire/chicken wire as the rest of the run. This was so easy, but make sure that you wear gloves when cutting the aviary wire. It is blinking sharp and hurts when it catches you!

Now it all comes together. I used two hinges top and bottom, and a bolt to keep my girlies safe. This was where I made a boo-boo. Make sure that you lift the gate off the floor slightly with a bit of wood or a slab, as otherwise your gate will catch when you open it!

My final step was to add a nice handle either side and make sure that everything was tight and secure, then add my chickens!!

We decided to buy 6 young hens from a local breeder. They came vaccinated, well socialised and a week or two away from laying. 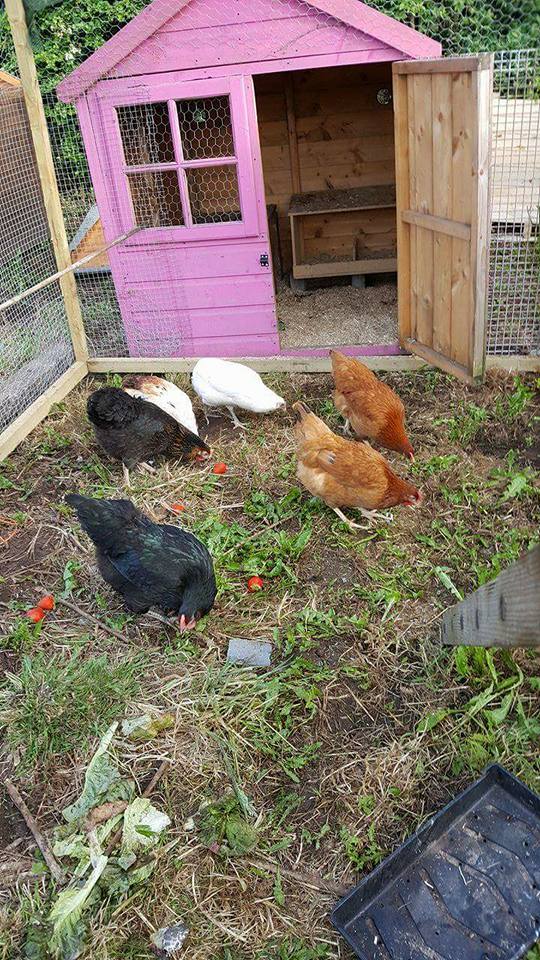 So they are now moved in and happy, but I am already planning their permanent home…just to source the parts now.

I will keep you updated when I begin the next stage!